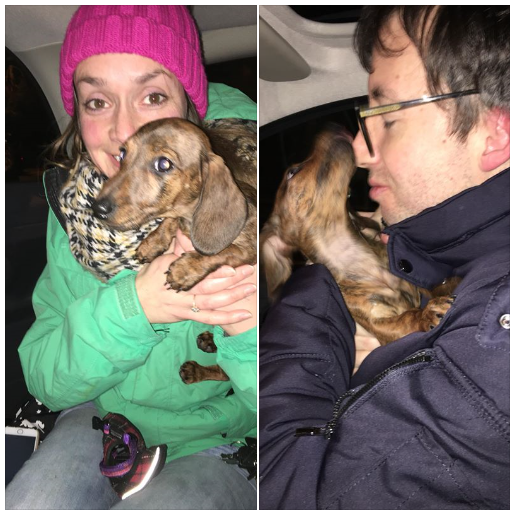 Straight after work last night I left for Dollis Hill tube station to help James and Clare on their search for dear Pretzel, the Dachshund puppy. By this point Pretzel had been missing for over 24 hours and the sun had set. There was a possible sighting at 19:30 the night before (thanks to doglost.co.uk for the updates on the forum) and we were sitting in a car on that very spot. They we were debating what our next move was: to continue searching in Gladstone Park (where she originally took off) or keep putting up posters in the neighbouring area. We decided to put posters up, because people would be more likely to see them on their travels home and then head to the park as a last resort for the evening.

After handing a poster to a person walking past me, I returned to the car to see a thumbs up. As I opened the door James ecstatically said, "We found her!!" I then saw Clare outside of the car on the phone in tears. We recorded the address and raced over to the house on top of Rose Croft Gardens. Turned out the father's little boy found Pretzel hiding behind the wheelie bins only 30 mins before they called us. The boy remembered seeing posters in the park. The father and the boy were thanked profusely and the boy given a reward.

After they exchanged farewells they returned to the car with Pretzel making all sorts of noises of distress and/or joy. No matter what it was, Pretzel was reunited with her dedicated owners. Clare contacted the dog walker, (unfortunately, I do not recall her name, the person who originally lost Pretzel) repeating their joy of finding Pretzel. The dog walker, who was also out searching, was not too far from where we were and found us. She burst into tears when she saw Pretzel safe and sound. You could tell she was distressed and feeling guilty for what had happened. There were tears and hugs all round.

After I said my farewells I felt elated for witnessing that moment. Finally something good happening to good people and my faith in humanity remains in tact. I don't know the exact number of people, groups and organisations that helped search for Pretzel, and I don't think Pretzel realises it either. However, a happy ending no doubt resonates with people; recorded here are all the well wishes.

I have since been told that Pretzel was given a clean bill of health after her trip to the vets, confirming that dogs are resilient and can survive on their own, even at 4 months old.  How she managed to cross a main road from the park without getting hurt or detected we will never know.

At the end of the day it feels good to know miracles do happen!